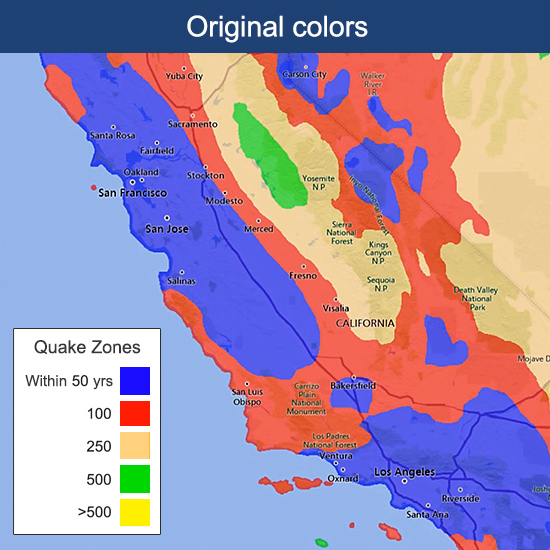 With earthquakes, bands of color were used to define zones where they are likely to happen within 50 to >500 year spans.

While doing user research, I learned color blind users were having trouble reading the maps. I recommended to the team that we revise the colors to make the maps accessible.

Utilizing software that simulated color blindness, I presented the problem to my team. Using California to illustrate the problem, it was shown that as colors shift, it becomes difficult for color blind users to understand how the zones relate to each other, and several of the zones start to blend together. This lack of contrast between zones would also impact low vision users who have difficulty seeing subtle tonal variations.

Maps as viewed by users with Deuteranopia, Protanopia and Monochromacy color blindness. 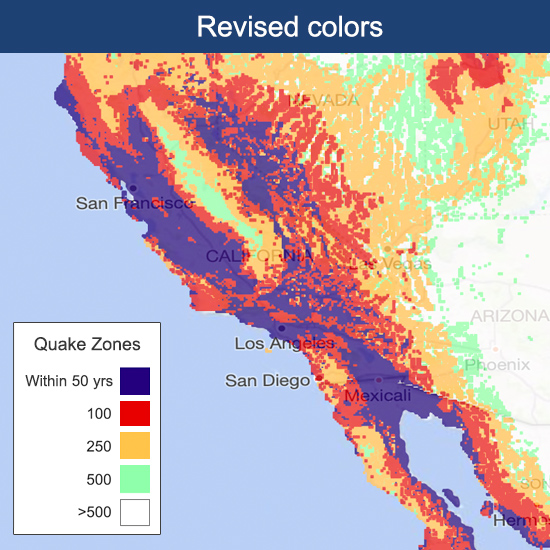 Though it was important to keep colors close to their original versions to support legacy users, I created a revised palette, calibrating color hue and value, that would be more accessible.

Revising the colors became even more crucial as the resolution of the maps was improved mid-project, adding finer detail and demanding clear delineation between zones.

To further assure the maps could be easily read, I suggested the areas of least risk were left without color.

Revised colors as seen by people with Deuteranopia, Protanopia and Monochromacy.

The updates to the maps were covered by Forbes in May, 2021.

This site designed and built by Jay Kamins for promotional purposes.
All content © Jay Kamins and his wonderful clients and employers. All Rights Reserved.